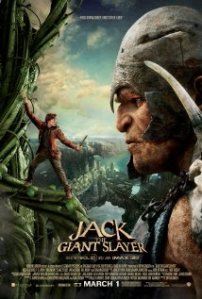 If you have ever read a collection of bedtime stores, chances are you have come across the story of Jack and his magic beans, whether it was entitled “Jack and the Beanstalk,” “Jack the Giant Killer” or some other variation. Whatever version fell into my hands, this tale was never one of my favourites—I tended to stereotypically gravitate towards princess stories and tales of true love. I liked it, sure, but it was never my go-to.

Nevertheless, when I first saw a trailer for Jack the Giant Slayer I couldn’t wait to see this larger than life retelling of the classic English story. Well a few weeks ago I went to see it in theatres. Despite being forced to pay an extra 3 bucks and don a pair of 3D glasses to watch it (oh, how I hate watching 3D), I LOVED this movie!

In this version of the classic, Jack (played by Nicholas Hoult) volunteers to climb the beanstalk in order to rescue Princess Isabelle and win her love. What he doesn’t know, is that one of the men in the rescue party wants to use the giants to become king.

This movie had a lot to love. In addition to Hoult’s awesome portrayal of Jack, Stanley Tucci and Ewan McGregor (two of my favourite actors) filled out the cast of oddball characters. There was lots of action, some good laughs, and the storyline was pretty fantastic. And OK, the 3D effects were very well done—they weren’t too gimmicky like some other 3D movies I could mention.

But one of the things I loved most about this film was how it treated the evolution of stories and the place of stories in our world. It talks about how history becomes legend and legend eventually becomes just another bedtime story. With the telling of a story, it changes and evolves, becomes something new. Jack the Giant Slayer is an evolution of the classic fairy tale, an example or how stories can change. But it is more than that. The evolution of stories is woven flawlessly into the film’s storyline. Jack the Giant Slayer sets up Jack’s battle with the giant’s as the history of England, a history which has evolved into the tale we know today. Is it believable that Jack’s adventure actually is a part of the British monarchy’s history? Of course not. Does it make a great story? Hell yes!

One thought on “Jack the Giant Slayer, and the Evolution of Stories”