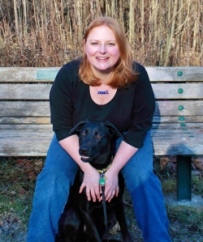 Hamilton-based Joanne Levy is the author of the new middle-grade novel Small Medium at Large, the story of 12-year-old Lilah Bloom who, after being struck by lightning, is able to talk to ghosts. Joanne was nice enough to answer a few questions about her book and her writing habits so that I may share them with you, dear readers. Read on to find out the story behind the book’s title, the difference between writing for tweens and teens, and Joanne’s drink of choice when writing.

Danielle: I understand that Small Medium at Large was originally written for teens, but was changed to a middle-grade novel. Tell us about writing for middle-grade readers. How did the story change because of it?

Joanne Levy: Writing for a middle-grade audience is very different in that tweens are really more inwardly focused and their worlds are a lot smaller. Stories about and for this age group tend to be more about the individual and how she fits into the world, whereas YA is more about the world beyond the teen. As for what changed in the story—well, just about everything. In the YA version, Lilah still got hit by lightning at her mother’s wedding, and she has a best friend named Alex, but that’s about it. The book was a lot darker and a lot less funny—there were still funny moments, but there were some pretty heavy plotlines in it like depression and teen suicide. So, yeah, totally different!

D: What made you want you write about a girl who talks to ghosts?

JL: The title came to me one morning as I was waking up and I recognized it as such a great one, that I wrote the book to fit it. Usually titles come later, as I’m writing the book, but this one arrived in my head fully-formed.

D: What is the best writing advice you have ever received?

JL: Butt in Chair. Writing is work and you need to just sit and do it to get it done. Although, a lot of writers I know are switching over to treadmill desks, so maybe I need to update that advice to Feet on Belt or something like that.

D: Something I am always curious about: is there anything particular you like to munch on while writing?

JL: Actually, no. I don’t eat while I write because that would just make a mess of my keyboard. I always have a coffee or a jasmine green tea close by, though.

JL: I’m hoping to write a second book about Lilah and her friends (both alive and those not so much) and I’ve also just finished a funny contemporary YA about a tomboy and it’s called…er…TOMBOY. No confirmations just yet on what you’ll see on shelves from me next, but keep an eye on my website at http://joannelevy.com/ as all the latest news will be there.

Also be sure to check out my Teen Book Club Recap: July with Joanne Levy!