This week when doing a Top Ten Tuesday post, I wrote about my favourite book characters and quite a few of those characters have been portrayed on the big screen. So I thought I would do something a bit different with this week’s Popcorn and a Book segment, and I will likely do this again in the future. Today I would like to compare a book’s character with how he/she is presented in the film adaptation. Below I have chosen three characters to examine. I look at a “good guy” and a “bad guy” who really came alive on screen, as well as a character that really flopped (The Ugly).

Effie Trinket from Suzanne Collins’ The Hunger Games: Elizabeth Banks did an exceptional job with this character in the film. She really captured the frivolousness of the Capitol and Effie’s bubbly demeanor. There was also the sense that she really was trying to help ease some of the horror that Peeta and Katniss were feeling, even though she is oblivious to just how monstrous the whole situation is. And I feel it is necessary to acknowledge the importance of the script writers, costume designers, make-up artists and the director (same for the rest of the list) as it really is a combined effort to bring a character to life on the big screen.

Professor Severus Snape from J.K. Rowling’s Harry Potter series: Ok, I’ve included Snape as a villain even though you could argue either way for him being good or bad; for the majority of the books (and films), he comes across as villain so that is where I put him. I cannot think of a better person to play Snape than Alan Rickman. He swoops into the classroom like a bat; his glare is at once hateful and suspicious. He maintains that ambiguousness that is key with the character. Until the very end, you never know if he really is a good guy or a villain. I…He just… gah! What a perfect Snape! 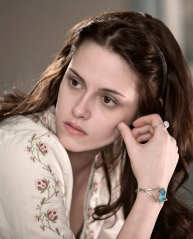 Bella Swan from Stephenie Meyer’s The Twilight Saga: Despite the fact that I really did enjoy reading this series, I have no trouble admitting that Bella pretty much sucks (pun intended) as a heroine. That said, when reading the books my imagination is my best friend. I can put power behind her words and expressions; I can feel what she feels and it really helps the character come alive. In the film, however, Kristen Stewart’s Bella is rather lifeless. She’s very static and choppy. Appearance-wise I think she is a great Bella… It’s when she opens her mouth that’s the problem.

“Popcorn and a Book” is a bi-weekly meme I host where I will compare one book with its adapted film, looking at the content, the way it has been visualized, the experience, etc. If you would like to participate in this meme, please visit the “Popcorn and a Book” main page for details.